Defenders Spotlight: Red She-Hulk
Learn the history of the newest Defender and read the stories that shaped her from damsel in distress to crimson powerhouse

On December 7, the most unorthodox team in history may be our only hope and reality’s last line of defense against insanity. Matt Fraction and Terry Dodson bring together some of the most powerful heroes in the Marvel Universe to face an ancient evil unbound in DEFENDERS #1!

Each day this week, we’ll closely examine one of the Defenders making up this new roster, giving a detailed rundown of their personal history and pointing you to digital comics containing the seminal stories that brought them to their current states.

Before they band together to safeguard existence, get to know the heroes we need more than ever with Defenders Spotlight! 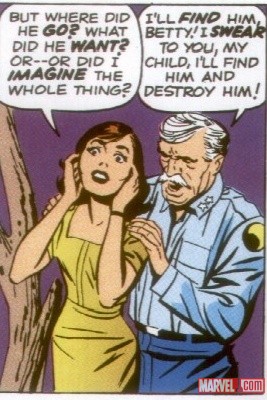 For years, Betty Ross sat on the sidelines while her husband Bruce Banner, aka the Incredible Hulk, played super-powered gamma games. Since becoming the super strong and emotionally tempestuous Red She-Hulk, Betty has been determined to make up for lost time, and will be continuing to do so when she joins the Defenders, a team her erstwhile love interest served as a founding member of.

Growing up without her mother and under the thumb of a stern, overprotective father in General “Thunderbolt” Ross, Betty became withdrawn at an early age, shying away from overt displays of emotion. She would become attracted to the similarly restrained Banner, but their union seemed doomed from the moment he transformed into The Hulk courtesy of a gamma bomb.

Despite the obstacles in their way, Betty and Bruce would fight for their romance, with her in particular becoming more bold and expressive as she faced adversity, standing up to her father and even facing down The Hulk. The two would marry and enjoy a fleeting period of happiness before Betty seemingly perished, the victim of radiation poisoning instigated by the villainous Abomination.

In actuality, The Leader and M.O.D.O.K. acquired Betty’s body just prior to her “death” and kept her alive an in a state of suspended animation. The villains used a gamma infusion process to transform their captive into Red She-Hulk, with former Hulk ally Doc Samson working alongside them to draw out her repressed anger, making for a more pliable subject they could manipulate. Red She-Hulk would ultimately turn against her “masters,” fighting alongside The Hulk to save her father, now a Red Hulk himself.

Betty and Bruce attempted to reconcile, but too much had transpired and their raging alter egos didn’t make matters any easier. When the Asgardian entity Nul possessed The Hulk, Betty joined up with the Avengers to oppose him and the rest of the Serpent’s Worthy, acquiring an Asgardian sword in the process

The first appearance of Betty Ross and the origin of The Hulk.

A love story between Bruce Banner and Betty Ross set in the earliest days of The Hulk.

The wedding of Bruce Banner and Betty Ross.

The identity and origin of Red She-Hulk revealed!

Betty and Bruce attempt to reconcile in the aftermath of World War Hulks.